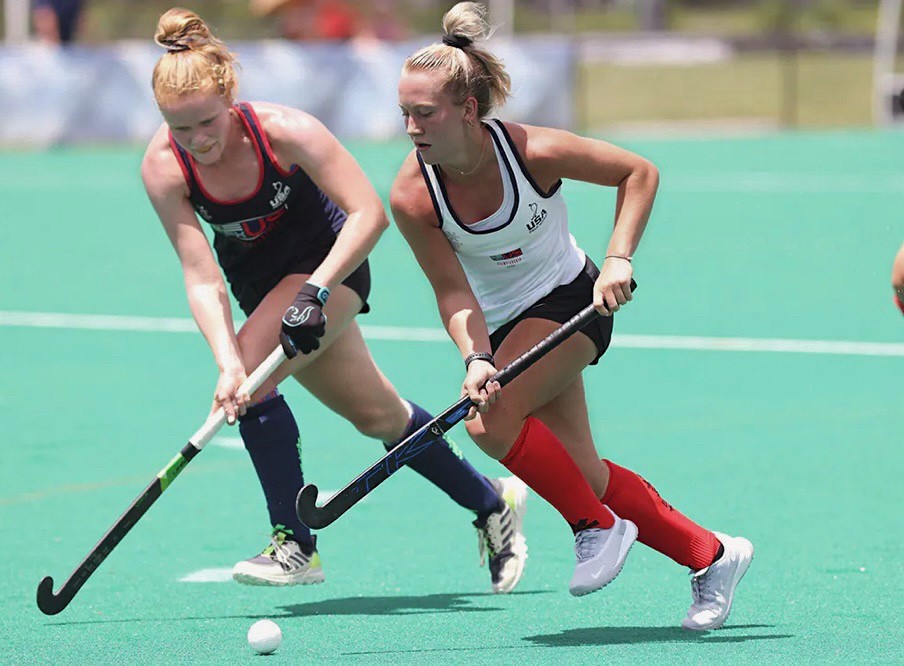 Penn State Junior Sophia Gladieux, Phia as she likes to go by, was one of 5 current Nittany Lions invited to participate in the 2022 Senior Nexus Field Hockey Championship (NXC) this year in Virginia Beach, Virginia. She and her teammates (Sofia Acosta, Mackenzie Allessie, Brie Barraco, and Grace Wallis) did not disappoint as they put on a great display of their field hockey skills in the tournament.

The young Gladieux excelled and was named the Most Valuable Player of the tournament, which host some of the top players from all over the country.

“I’m very honored and humbled to receive the MVP award,” Gladieux stated. “To be honest, my mindset going into the tournament was to get in shape and get some touches on the ball. I’m not going to lie, it felt pretty good to receive the award considering I was playing against the best players in the United States, so definitely a big confidence boost before the fall season. “

Gladieux has won countless awards in the 12 years she has been playing field hockey. She has been to hundreds of tournaments over the years but the thing that matters to her the most is not the awards she earns but the fact her hard work and dedication have paid off for her.

Gladieux is a center now but her favorite position was midfielder because you get the ball a lot. But she has excelled at the transition to the center position and any forward position because the midfield finds you and then she gets to do what she considers the fun part. Scoring goals! She had 12 goals on 60 shots her freshman year and in her sophomore season she led the team with 18 goals including 5 game winners.

She grew up with a very supportive family and a few of her role models are Katie O’Donnell because they have similar playing styles and surprisingly Tom Brady, the NFL quarterback.

“There is something about how he plays and his determination to win and get better,” she says. “And I know, I’m a Philly fan so no one hate on me please.”

Another major inspiration who hits closer to home is her older sister Sarah who is currently entering her second year studying law at Rutgers University. Phia looks up to her and admires her greatly and has nothing but respect for her and her work ethic.

” I have never seen anyone as motivated in my life as much as my older sister, ” Gladieux proudly states. “I am really excited to see where she ends up in life because no matter what she ends up doing in the law world, she is absolutely going to kill it!”

Field Hockey has been great for Gladieux over the years because it has brought her all her best friends, her forever sisters as she calls them. She has created many great memories and will create many more as the young Nittany Lion gets ready for the upcoming season.

“Penn State is the best school in the world!” Gladieux proudly exclaims. “Not only has it brought me my sisters for life but the coaches and staff are the best! They do so much for us and make everyone feel welcomed and like they are at home. The atmosphere is like no other and you just won’t understand until you experience some type of event at PSU.”

In her spare time Gladieux tries to keep busy and this year she has rekindled her love for reading as she is currently on her 8th book read this summer. She also loves to draw and paint but wishes she had more time to do so. She also loves to listen to true crime podcasts because she finds them interesting.

She doesn’t want to think about life after college because she is living in the now and is enjoying her life but she is majoring in Early Childhood Education so she will be able to teach pre-k to fourth grade when she graduates. But she does have very lofty yet achievable goals for her future. And no matter what they all involve field hockey because of her love of the game and she would love to mentor others.

“My goals for the future after college are to play on the USA Field Hockey team and when my career is over, hopefully not for a long time, I plan on teaching full time somewhere and coaching field hockey, especially at the college level if the opportunity arises,” says Gladieux.

Gladieux and the Penn State team are looking to have another great season behind some of the top players and coaches in the nation and Gladieux and her forever sisters have set some high goals that are very achievable for them. And in spite of thinking about the next level, the future, there is only one thing on her mind right now.

Gladieux is the daughter of Bernard “Bunky” and Lynn Gladieux. She also has an older brother Scott and her aforementioned sister Sarah.