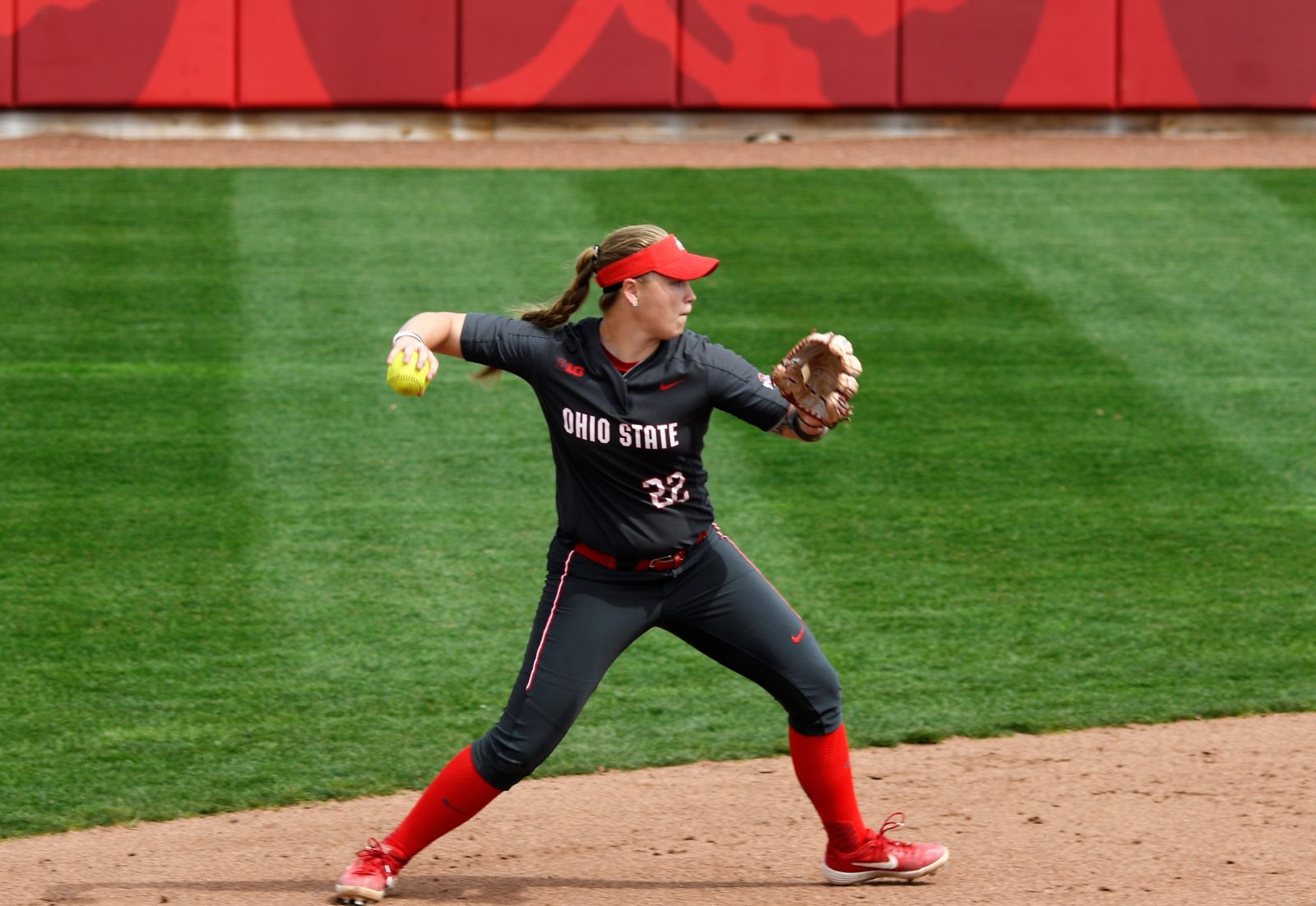 Columbus, Ohio – On a beautiful day at the Ohio State campus it was packed in the sports venue areas as people came from all over the nation to cheer on their Buckeyes in a multitude of sports. Over 70,000 people were at the Spring football game and then afterward they headed to see the Buckeyes play baseball, golf, rowing, women’s lacrosse, and of course softball. The Buckeyes hosted a doubleheader against their rivals the 21st ranked Michigan. The Buckeyes would split the games dropping the first one 6-2, and then coming from behind in dramatic fashion and winning 2-1 in extra innings in the nightcap.

The Freshman Lauren Rice took the mound for the Buckeyes and it didn’t take long for the home team to build a lead as Lilli Piper drove the ball deep over the left field wall for her 4th home run of the season. Not to be outdone, Emily Clark followed with a homer of her own, her 8th of the season, getting the Buckeyes off to a big 2-0 lead in front of a standing room only crowd.

The Buckeyes would threaten but couldn’t get a run across the plate despite loading the bases and having runners in scoring position on several occasions.

In the top of the seventh, a hit batter and a base on balls helped Wolverine freshman Lexis Blair add insurance for her team as she drove in a run with a single to left-center. Then with the bases loaded the Buckeyes brought in Senior Katya Duvall who proceeded to shut down the Wolverines threat by striking out Katie Alexander.

In the bottom of the seventh Bri Betschel singled and Piper blasted it to the Wolverine shortstop who couldn’t handle the ball. But that was all the Buckeyes could do in the inning as they fell in the first game 6-2. Wolverine Sophomore Meghan Beaubien earned the win in relief, while Rice took the loss for the Buckeyes.

In game two it was a pitchers duel as the Buckeyes started the Senior from Montana Morgan Ray who would match up against the Wolverines star pitcher Beaubien who had 18 wins and a 1.60 earned run average.

Neither team could get much offense going as both pitchers bore down and each team only getting 5 hits each throughout the game. Michigan took a 1-0 lead in the top of the second but Ray shut them down the rest of the way with 10 strikeouts, her personal best in a game.

The Wolverine’s Beaubien was also stout in the finale, keeping the Buckeyes off the scoreboard until a two-out solo homer in the bottom of the seventh tied the game at 1, by the freshman third baseman Ashley Prange, and sent the game to extra innings.

Ray shut the Wolverines down, 3 up and 3 down, and the Buckeyes carried momentum into the bottom of the eighth, reaching on a leadoff hit-by-pitch before stringing a pair of singles together to push across the winning run on a hard shot RBI single down the left-field line by Betschel.

It was the first loss Michigan has in the Big Ten so far this season and is the Buckeye’s second year in a row defeating Michigan in the series finale, last year defeating them 10-1.

Ohio State closes its four-game homestand against the Ohio Bobcats at 6 p.m. Tuesday.