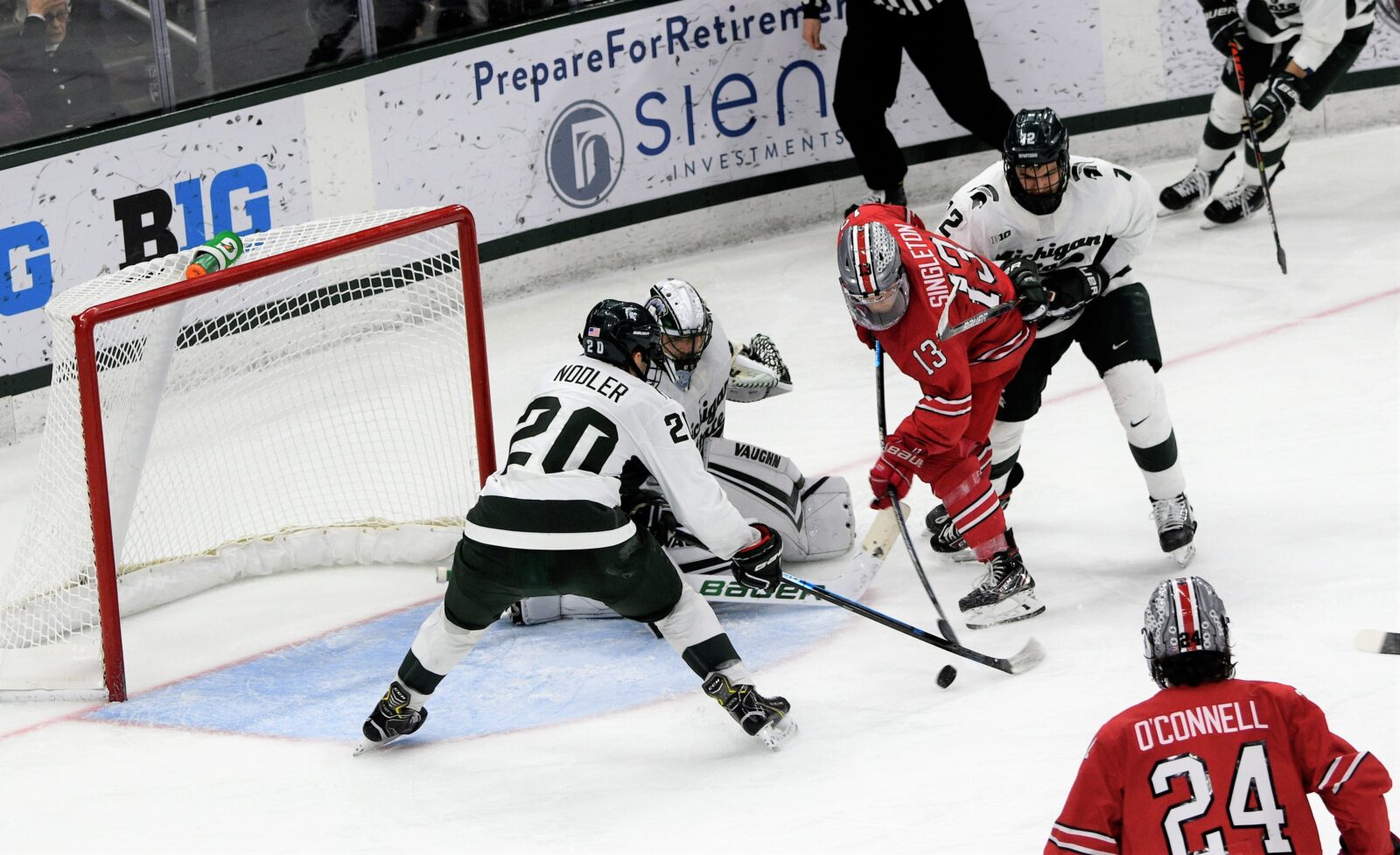 East Lansing, MI, – It was a packed crowd on a Saturday night full of green and white-clad Spartan fans who had come out to support their beloved Spartans after a heartbreaking 1-0 shutout by the 12th ranked Ohio State Buckeyes the night before. And the Spartan men’s hockey team held a 2-1 lead throughout much of the game but in the waning moments, the Buckeyes were able to score 3 quick goals for a 4-2 victory and the season sweep.

It was a very fast-paced game throughout the first period with the Buckeyes getting several god chances on goal but Spartan senior netminder John Lethemon made several great saves. The Spartans would strike first when at 12:53 Patrick Khodorenko knocked the puck out of the air and in. After a review, the goal was deemed good. 4 minutes later, the Buckeyes tied the game on the power play. Matt Miller passed to Tanner Laczynski in the faceoff circle and set up Quinn Preston for a shot just outside the crease. His first attempt was saved, but he chipped in his own rebound for his 12th goal of the year. With only 11 seconds left in the first period, the Spartans capitalized on what would be a very costly turnover. Jagger Joshua made the Buckeyes pay for the mistake with his second goal of the season, giving the Spartans a 2-1 lead after the first. scoring at 19:49. Ohio State outshot the Spartans, 23-12, in the period. It was the first time the Buckeyes had more than 20 shots in a period since Dec. 29, 2018 vs. Mercyhurst. It was a very fast-paced first period with only one penalty.

In the second period, it was another fast-paced 20 minutes with only two penalties, one for each team. Buckeyes goalie Tommy Nappier made 4 great saves on the Spartans on the penalty kill.

In the third, the Spartans did a great job with their forechecking and played solid defense but with less than 5 minutes to go, the Buckeyes cranked up the heat! At 15:11 freshman Jaedon Leslie tied the game. He threw a shot on net from a sharp angle and it snuck behind the goalie for a 2-2 game. Gordi Myer and Austin Pooley had the helpers on the goal, Leslie’s third of the year.

At 15:26 the Buckeyes went on the power play after a tripping call in the neutral zone. Carson Meyer found Laczynski standing all alone in the left faceoff circle and his rocket blast of a wrist shot went far side for a 3-2 Buckeye lead at 16:39. The Spartans pulled their goalie in the final two minutes but were unable to generate sustained pressure. Preston sealed the win with an empty-net goal in the final second, sending the puck down the ice from the Buckeye zone.

The Buckeyes ended the game ahead in shots, 41-31. Tommy Nappier played 59:57 for the Buckeyes and had 29 saves. John Lethemon had 37 saves in 58:21 for Michigan State. Ryan O’Connell and Matt Miller each had two blocks to lead Ohio State.

The Buckeyes are 18-10-4 on the year, with an 11-8-3-1 record in Big Ten play. Michigan State falls to 14-17-1 and 10-11-1-0 in the conference. The sweep moved the Buckeyes into a tie with Minnesota for second place in the Big Ten (37 points) with one week remaining. Ohio State and Minnesota are four points back of Penn State (41), which ended its regular-season schedule this weekend. Notre Dame is in fourth (35), with Michigan fifth (33), Michigan State sixth (31) and Wisconsin seventh (20).

The Buckeyes end the regular season with a home series vs. Wisconsin. The teams will meet at 6 p.m. Friday and 8 p.m. Saturday. The eight Buckeye seniors will be recognized pregame Saturday.