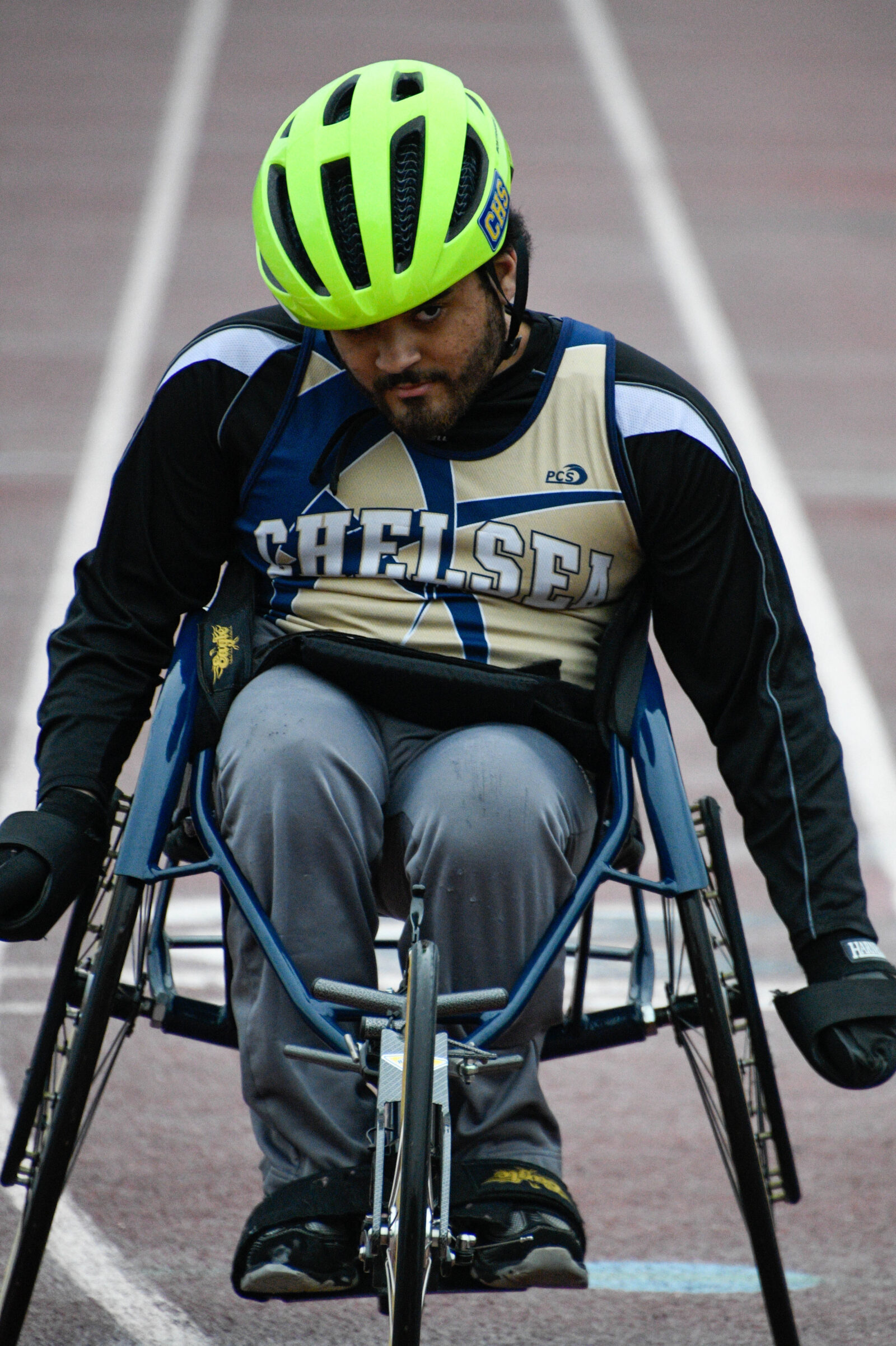 It’s been a rough year for Chelsea Michigan’s Jacob “Jake” Nelson. In the Junior student’s first year of competing in track and field at the High School level, it’s been horrible weather for almost every meet for him and his team. It’s either been freezing cold or rain or both. And Jake doesn’t like the rain at all. But he wants to compete and do his best at everything he does. And with the support of his parents, Dan and Marijane Nelson, friends and family, his team, and the local community he competes well.

What makes Jake’s story unique from others at the High School track and field level is Jake competes in a specially designed wheelchair and through the support of two grants he was able to get one in time for this season as the Michigan High school Athletic Association (MHSAA) has added a wheelchair category in track. And Jake has had much help from his family and coaches, especially his Para Athlete Professional Coach Becky Piper, who works with team MPI.

Jake was born with spina bifida and water on the brain and has been in foster care with the Nelson family since he was an infant. The Nelsons have fostered many children over the years offering them many opportunities in life which they would not have received otherwise. And they encourage all their kids in all that they do especially in academics and athletics.

Jake has been working hard and training as much as he can. He has been hitting the gym with his friend and classmate Jackson Warriner and doing a lot of lifting. On Wednesday, the 18th, it was pouring down rain and another cold Michigan day as he was preparing to run at the multi-team meet in Jackson. Pre-meet he was in the dry concession area with his dad stretching and warming up. It was the day he wanted to achieve his personal record (PR) in the 100-meter dash. But it was not looking good. But his mother’s prayers helped because as he rolled to the starting line the rain had completely stopped.

Jake stared straight ahead with a bold look of determination on his face. As the starter’s pistol went off Jake shot off like a bullet, hand over hand, fast as he could. He strayed a little to the right but he got back on the course never leaving his lane. Halfway through you could see him going much faster trying to get that pr. The whole crowd was clapping and cheering for him encouraging him. He rolled over the finish line and up to his mom who was recording him and cheering loudly for him.

Jake loves numbers and was very curious about his time and when his mom looked it up she screamed excitedly, of course, he knew then how great he had performed and she had to show him before anyone else. Jake had set a new pr at 34 seconds knocking almost 4 seconds off his old pr. Everyone came up to congratulate him including his coach. And Jake just smiled and was so thrilled. His hard work was paying off.

Jake also bowls for the Chelsea High School Bowling team, the Bowldogs as they are called. He consistently bowls in the ’80s & ’90s from his wheelchair and his goal is 100. Jake is also an all-A student. Jake will be running the 100-meter dash in the MHSAA State Finals on June 4th and everyone is very excited for him. Especially himself. And he’s going to try to set another pr.